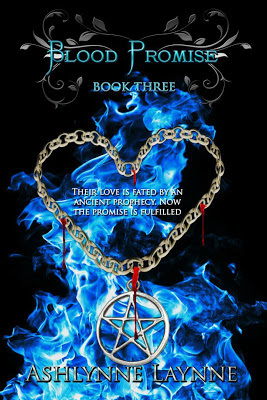 
“Their love is fated by an ancient prophecy. Now the promise is fulfilled.”


Ascher Rousseau is a half-human, half vampire whose life has been a series of prophecies and predictions. After finding incredible love and passion with Shauna—a Wiccan with powers beyond anything he’s ever known—he seals to her and hopes for happiness. But his enemies seek to destroy all that he loves, and he finds that happiness never lasts for long.

Darkness is descending and a vampiric revolution is nearing. A new brood of hatchlings is born to join their darkling brothers, in preparation for war. A preordained chain of events is set into motion that could lead to the rise of the demonic “cloaked one” and his half-human fallen children, while ending humanity—as we know it.

Can a supernatural love and the loyal bond of a family save the Rousseaus and the world from certain extinction?

Shauna stood tall, her posture erect and with her shoulders squared. Her shaky hand tensed as she drew her arm back, the dagger clutched inside. “Here goes nothin’...” Determination blazed in her eyes as she aimed and released the dagger, sending it hurtling toward the target. The knife soared through the air but dropped short of the tree.

“That’s okay, love. You did good, considering it was your first try. Let me help you.” He took a wide stance behind her, helping to reset her posture. “Now,” he whispered into her ear, placing another dagger in her hand. “Let’s see if we can get this right.” Winding his hand around her hand and the dagger, he guided her to the draw. “It’s all in the shoulders and wrist.” He wiggled their wrists back and forth as if they were one.

She drew a harsh breath as her pulse thudded against his fingertips.

Ascher pushed against the small of her back to lengthen her spine. “Stand tall.” His left arm held her waist steady while his right arm prepared her wrist to release the dagger. “Breathe deeply.”

Her whole body tensed, as both their arms drew back then flew forward, releasing the dagger. It soared through the air, landing just above the bulls-eye.

Ascher was proud and gave her an encouraging smile. He’d used minimal strength and only held her arm to give the illusion of his guidance. She’d done ninety percent of the work. “Great job, love.” He flashed over to the target tree, retrieving two iron poles from behind the bumpy bark—no way would he put a silver javelin in her inexperienced hands. He’d stowed them earlier in the morning while Shauna was showering.

His mood perceptively brightened. Javelin fighting was his preferred method of battle. He held the bars out, whipping them in measured circle eights, each slice of the metal heating his blood. Handing her the second bar, he watched her again.

She weighted it in her hands and advanced toward him with a smirk.

Her championing of the rod with such easy twirls shocked him. “You’re pretty good at that.”

“Part of cheerleading was learning to twirl a baton—you know for parades and stuff. Sometimes, I filled in for the girls who twirled the flags. Our football and basketball teams sucked, but I loved doing the dance routines. This bar is longer and heavier, but the movements are similar.”

Cheerleader Shauna in her short skirt and swaying pompoms had been the star of a few of his fantasies. Watching her swing the pole made the skin on his neck prickle. This was a new sensation for him. He stilled, watching the strong muscles flexing in her newly sculpted body. Damn, that’s really hot!

Giving her a come-hither flick of his hand, Ascher widened his stance, gripping the bar between his down-facing palms. “This is a neutral position.” He waited for her to imitate his movement and only continued when he was pleased with her positioning. “All poses start from here.” Raising the bar in one hand and above his head, he gave it a series of turns, the velocity of the revolutions resembling the blades of a helicopter.

She stilled, her eyes rounding with astonishment.

“Ursula has never had to fight a battle on her own, so she’s not very good with weapons. Sure, she can overpower someone weaker and with less skill, but she has limited training with daggers and spikes and only a basic knowledge of sparring. Her strengths are evasion and swimming. She can swim for miles and submerge just as long. You’ll be strong sweetheart, but you’ll be a newborn with lingering human weaknesses.” Bringing the bar back to neutral pose, he motioned for Shauna to reciprocate.

Her stance was now self-assured, cocky even and evident in her smug expression. “I can beat her. If she’s a novice, she’ll be easy to beat.”

He sensed the wheels turning in her head; clearly, she didn’t take this seriously at all. “Damn it, Shauna! This isn’t a game. One false move—just one moment of lost concentration and that’s all it takes. She’ll pick up on your weaknesses and use them against you. Then, you—will—die.”

a Rafflecopter giveaway
Posted by Unknown at 18:00