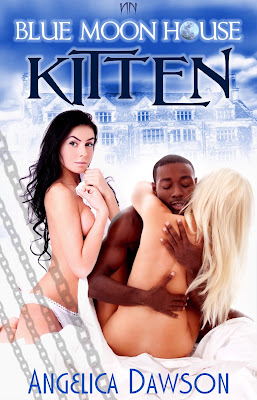 Jocelyn considers herself sexually experienced, a leader and manipulator. She is looking for the next challenge. The rumors surrounding Blue Moon House sound like just the thing she's looking for. Losing her roommate to marriage, she also needs a new place to stay. Hoping to find both in the same entity, she follows the rumors to their source and finds much more than she bargained for, beginning with a discovery that defies her biological science background - vampires.

Twice more he pushed her hips, resuming the swinging, but after the second she was lost in the pleasure of his fingers finding their way into her, tickling her exposed lips, teasing her clitoris. She huffed on the member in her throat as her eyes rolled. He seemed to throb and she closed her mouth on the next swing.

His ejaculate coated her face as his penis collided with her closed lips. It flew into her hair, onto her breasts. She pulled her hands to her face, trying not to scream, trying to stay calm. Normally it wouldn't bother her to wear a man's seed, but hanging like this, she was already on edge.

Masculine arms came under her shoulders, lifting her. His free hand untied her legs, letting her fall against him. As he carried her to the tub, she noticed Sophia standing nearby, empty kettle dangling from her fingers.

“You're all right,” Harry whispered. “You did amazing.”

Jocelyn splashed water on her face, trying to wash away the semen and the tears. The water was blessedly hot, just short of scalding. She shook her head from side to side. Nails bit into her wrists as her hands were pried away. She found herself staring into Sophia's jewel-like eyes.

“You are fine,” she said with authority. “You are not less. You are not trash. You are proud. You did this. You chose this. You gave and now you have received. This is not a sign you are powerless. It is a sign that you grant power, power that is now and is always yours.”