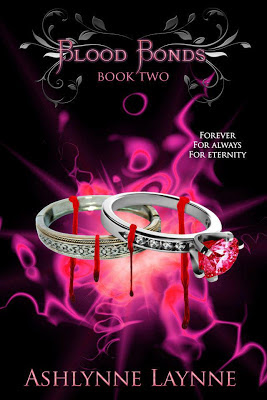 
“Forever. For always. For eternity.”


The ties that bind two hearts are powerful. For Ascher Rousseau and Shauna McCutchin, it’s more than just a blood bond. Their union is that of vampire legend. Their love is a predestined prophecy foretold centuries ago.

It’s a week before Ascher and Shauna's sealing and the couple is making final preparations for their eternity, but Ascher's ex has other plans. Ursula is hell-bent on revenge—revenge fueled by lover's scorn and her father's death—and she begins breeding a fresh army of newborn darklings to do her bidding.

When Ursula finds a new weapon—an ally with the capability to dismantle the Rousseau clan— Ascher and Shauna's bond is tested and they must stand together against Ursula or lose each other for eternity.

A devious smirk crossed his face as he grabbed the champagne bottle.

“What are you doing?”

He shook the bottle, his thumb plugging the opening.

She sprang to her feet, running to the far corner of the room, but he gave chase and willed himself to the opposite wall. His strong arms seized her and cornered her against the wall.

“That’s not fair,” she seethed. “You won’t always be faster than me.”

He shook the bottle more. “Wouldn’t I?”

She squealed, “No,” but it was too late.

The bubbly stream deluged her, raining down, soaking her with its sticky sweetness.

Ascher dropped the bottle then rubbed the stickiness all over her, massaging the liquid into her skin. His mouth journeyed between her breasts and lips, kissing, sucking and nibbling at her. “You’re so delicious.”

“I’ll just have to prove my point to you.” He reached down, plunging a finger into her.

Her eyes widened with surprise.

Licking his finger clean, he said, “Nectar from the gods.”

He was so dirty and she liked it. His no fear approach to their sex life shocked and delighted her. His kisses migrated south, his lips and tongue equally stirring her hot skin.

“I’ll never get enough of you.”

He lifted her into the air, gently parting her thighs while his arms guided her legs over his shoulders. Her back was firm against the wall while his hands effortlessly supported her weight, holding her snatch at his face level.

He glanced up at her, grinned then growled, “Oh, yes.”

She squirmed, attempting to get away from him, knowing it was impossible and downright foolish to attempt it.

He squeezed the soft flesh of her ass cheeks, as his tongue burned hot laps onto her swollen clit. “You’re not getting away from me.”

“You’re—driving me—crazy!” she stuttered with spastic pauses, her fingers threading into his raven locks.

A muffled laugh came from below.

Her eyes rolled as her neck dropped back. She didn’t resist or protest—why would she when it felt so amazing. She let him have his way. When he wanted something, he always got it. She collapsed as the waves of orgasm flooded her violently shaking body.

He shifted her, cradling her into his arms, gazing at her with a hint of smugness on his face. “Guess I’d better clean you up. Care for a shower?”

a Rafflecopter giveaway
Posted by Unknown at 15:00