To celebrate the release of Blood Promises, book three in The Progeny Series, I hereby declare today to be... 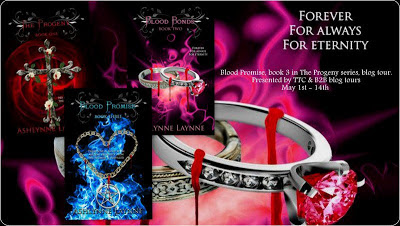 Keep popping back throughout the day to get the lowdown and read an excerpt from each book in the series. And don't forget to enter the giveaway whilst you're at it, you can't miss it ;-)

So, without further ado, let me introduce you to The Progeny Series, by Ashlynne Laynne...

At its core, The Progeny Series is simply about a man and woman who fall in love, and the fact that he’s a half-blood (half-human, half vampire) and she’s a Wiccan human are secondary factors. When we meet Ascher, he’s grumpy. Frankly, who could blame him? He’s engaged to seal to Ursula—a cold and careless vampire who wants nothing more than to get her hands on a bloodstone— and he feels conflicted about his existence.

All of that changes when he meets Shawnette McCutchin. She’s beautiful, intriguing and possesses some of the most potent blood that he’s ever smelled. A war immediately begins inside Ascher. He craves Shauna’s blood just as much as he craves her body and the closer they get, the harder it is for him to control his urges. After Ascher calls off the sealing to Ursula, the trouble begins. His family’s peaceful period ends when Ursula’s army attacks the Rousseaus.

Ashlynne Laynne has always had a soft spot in her heart for vampires but grew tired of the garlic fearing, sun-loathing creatures of old. An avid horror movie fan, she tends to enjoy media and music that is of a younger, more eclectic nature. This was the catalyst for her writing The Progeny. The vampire/witch pairing is unique and different when most books pair vampires with werewolves.

Ashlynne loves writing on the edge—combining the erotica and romance genres—and thinks of Ascher and Shauna as the wicked, damned version of Romeo and Juliet. She is currently working on book four of her Progeny Series, book one of her upcoming Rocker Series, and an untitled novella WIP. In her spare time, she enjoys cooking, reading and spending time with her family. She juggles the hats of wife, mother, full time employee and part-time writer, hoping to write exclusively one day soon. Find and follow here online on Twitter. Check out her Manic Readers page, Blog and Website, or leave her a note in her Reader Email.

Ashlynne lives in North Carolina with her husband and teenage son.