I am delighted to welcome Raven McAllan onto my blog today, author of Miss Simpkins' School: Miranda released earlier this month by Breathless Press.

I've always written, but I didn't think I could write and be published until a couple of years ago. As a child I won two Where Does Chocolate Come From writing competitions, but at senior school I was told my writing was too flowery and not factual enough.

I just write what my characters tell me. At home, I sit in my study all day, looking out across the garden to the fields and forest. I don't go into the lounge until the evening. (Well the study is nearer the coffee pot.)

It was a harlequin writer, Robyn Donald who I met several years ago, in New Zealand. She told me to sit down and try. Her descriptions of New Zealand made me want to visit there, and her.

Just try. You never know until you do, what you're capable if, and as long as you do your best, you're the winner. Also write as you can, not as you think you should.

Er probably not. I didn't start drinking full strength coffee until I was pregnant. I hate the feel of new wet wood. It gives me goose bumps. I always eat the caramels in a box of chocolates before anything else.

Champagne, chocolate, MacBook Air and charger (can I have a power source), comfy feather pillow and my Uggs. 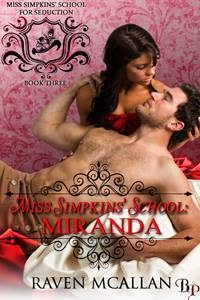 Lessons learned at Miss Simpkins' School is just the education Miranda needs to learn how to seduce her reluctant Lord. Or is it?

Miranda may be a well brought up lady, but she has needs, and she is determined to go after who she wants.

Enlisting the help of Miss Simpkins and her School for Seduction, she sets out to tempt Felix. Men can be so difficult sometimes, and not see what's right under their nose.

It falls to her to show him that age is just a number. She may be young, but she knows what she wants. And she is determined to get it.

Will Felix be able to resist temptation, or will he finally see sense and claim what's been his all along.

Little does Miranda know what Felix has in store for her.

7) Congratulations on your recent release of Miss Simpkins' School: Miranda, what was your inspiration for writing Miranda's story?

Miranda kept shouting at me. She wasn't really a front runner until I realized who she was related to and why she needed her story told. Especially as her story is a reversal of what was expected in those days. She wants her older man. It's him who doesn't think a large age gap is right. Totally the opposite to most Regency marriages.

It flowed. I love the Miss Simpkins' School series. They're so much fun to write.

About a week. Seriously. I wrote three of this series' short stories in under three weeks. They just hit me, and when that happens I listen—and write.

“You see, Felix, ladies gossip. I know so much happens that is rarely admitted to openly. And it intrigues me. I want to experience some of those things. However, I’m greedy. I want you to be my tutor. No one else. And added to that, I want to know it is only me you...attend to, shall I say? You keep telling me I’m too young for you? Really? Or are you scared? Scared you won’t be man enough for me?”

She had never known just what the words “a pregnant silence” meant before then. His eyes now widened and something unknown to her flashed in their depths.

“Oh, Miranda, I will be more than enough for you, my dear.” The velvet tones poured over her, and surrounded her with notes of heat and intention. She had never felt so taken in thrall by a voice before. Each word, each nuance, enveloped her and encouraged her body to tingle. His smile was one-hundred-percent sex. Never before had she been the recipient of that expression and it was the most juice-inducing look ever. “The thorny question is...”

Felix paused, and one side of his mouth quirked up in what she thought of as delicious. “Are you woman enough to cope?”

11) Over to you, what can you tell us about Miss Simpkins' School: Miranda to make us rush out and buy it?

Well, if you like feisty women, hot bod men and a story with lots of hints and intimacy…Evidently I write very hot. Snigger I try to hint and tease, and let you give your imagination full reign…

Well, There's two more Miss Simpkins' stories, Jane and Molly with my editor, so I'll be doing edits for those. (Breathless Press) Plus two books out of a series of six, all finished with Totally Bound. The series is set in a Scottish castle which is a BDSM club, called Diomhair. Secrets Shared is up for pre-order in April and on general release in May, and Secrets Uncovered will be out in July. Oh and I'm writing Nina's story, (Nina's Dom) which is book three of Dommissimma after Master, And A Dom's Decision- Athol's Story. Um after that? Who knows. I write as my characters tell me to.

Pantster every time.  I did try to plot once…ARGH, what a stale, cardboard, wooden load of rubbish.

I love both. Print to smell a new book. Digital for ease of, well everything. I used to take a case full of books on holiday. Now I have room for clothes.

Depends on my mood.

Facebook because it's easier to find everything on my lap top.

Christmas. Mind you my birthday is only a couple of weeks before, so December tends to be celebratory.

Morning every time. As often seen by my comments at 2 am, 5 am or whatever on FB.

Again depends on my mood.

Thank you so much for taking part, Raven I wish you every success with your new release.

To discover even more about Raven McAllan and to keep up with her latest projects, you can visit her at:

The bag over his head took him by surprise. Before he had time to react his arms were bound to his side, and then someone kicked his feet from under him. In his soft house shoes he was powerless to kick out and injure. He did his best to relax to cushion his fall. The last thought he had was he hoped to hell he didn’t topple down the stairs.

He didn’t. Before he hit the floor, strong arms held him horizontal, something rough—rope he surmised—was wrapped around his ankles. How he wished he had his top boots on, it would have been so much harder for him to be secured. Resigned for the moment, he assumed he was carried along the corridor. Even though he knew the house as well as his own, unsighted, and with his hearing muted, he was hard pressed to tell just where they were.

Ever the fatalist, he mentally shrugged and awaited his fate, whatever it might be. It seemed someone was having a laugh at his expense.

Kidnap? Unlikely in this house. Mistaken identity? Also unlikely. Her? He thought of the tormentor of his dreams. Surely not. She is not capable of executing such a thing.

Several minutes later he wasn’t quite so insouciant about everything. He was still being carried. They had, as far as he could tell under the circumstances, descended a long flight of stairs and ascended a shorter one, entered and also exited several rooms. Sometimes the footsteps of whoever carried him sounded heavy and hollow, at other times he heard nothing at all. Without reverberations, he assumed that sometimes they moved over carpeted floor and others bare boards. It was no help. His host’s house was old and had a mish mash of floors and coverings in no particular order. They could be going around in circles for all he knew.

His captor, he decided that was the best name applicable, halted and through the fusty material that enveloped him, Felix heard several faint door hinge squeaks and dull thuds. The dust and fibers over his face made breathing ever more difficult, and his mouth was dry. If I’m not released soon, I won’t have to worry about my knotty problems. I’ll be deceased and Soutar can deal with the lot of them.

That morbid thought didn’t sit well with him. Instead he began to get annoyed. Whatever was happening had been going on far too long, and it was no longer a joke. As his captor paused once more Felix kicked out. The curse he heard was loud enough to cut through his covering like a knife through butter, and it was good old-fashioned Anglo-Saxon. The jarring went up his leg, travelled through his body, and made his teeth rattle.

“I warned you.” The thump to his head was worthy of any devotee of Jackson’s Boxing salon.

Bugger, that wasn’t in the plan. It was Felix’s last thought before he saw stars and then nothing else.