I am delighted to welcome Kayla Jameth onto my blog today, author of From the Ashes published by Breathless Press.

In keeping in my favourite ‘three act structure’, here we go with another round of twenty questions as we try to get to know Kayla that little bit better.

Thank you, Aurelia. <Clears Throat Nervously> I hope I know all the answers to the questions. 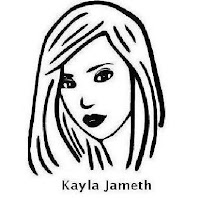 A knight and a former princess, Kayla Jameth now spends her time writing m/m romance. A true Renaissance woman, she has done everything from cross stitch like a proper lady to welding with the best of them. An eclectic life has left her with an unique understanding of the world inhabited by men and an appreciation for the difficulties faced by men in m/m relationships. It is her devout wish that her experiences translate into a richer telling of such tales.

It is something that I fell into. A friend asked me to help edit her Bleach slash fanfiction. Since she and I read a lot of yaoi, I was more than happy to help. So I became Kei-chan and started reading slash. Unfortunately, most of the Samurai Champloo slash was mediocre at best. I foolishly said, "I can write better than that!" and my friend made me back it up.

Another photo inspired a much longer piece from me entitled Alexios' Fate and is my first novel. While working on the sequel to Alexios' tale, I revamped From the Ashes and now I can say that I am multiply published!

No, I can't say that I do. I just sit down and work on my story whenever I can.

3) I see that you specialise in male/male romance; was this always your intention – a conscious decision before you ever picked up a pen – or did you find yourself led in this direction by your characters?

I started reading yaoi years ago and was hooked. My friend Sara introduced me to m/m romances and there was no escape.

Since my first piece was a fanfiction slash, it's no surprise that I continued in that vein and have been writing m/m ever since. Besides, I find that I have no interest in het romances. I never have. I don't identify with the heroines. I'm too much of a tomboy.

AB Gayle and Deanna Wadsworth have directly influenced my writing. Alison edited all my fledgling attempts and taught me important things like POV and show not tell. I call Deanna the queen of gab. She has taught me how to increase dialog in my stories.

JL Langley's stories were an eye-opener and have influenced my sex scenes.

I am a former princess regent. In that post, I was responsible for the arts and sciences (culture) of a D&D based LARP. That means I can sew amazing medieval/fantasy costumes, and have worn chain mail into battle. I'm also a knight because of this.

I am a science/math geek. I graduated at the top of my class, even in college I've always been in the top 5%.

I'm a tomboy. I grew up on a farm. I can: weld, make maple syrup, drive a tractor, wrangle cattle, can veggies, sew, do cross-stitch/embroidery, and a slew of other things.

All in all, I am a bit of a Renaissance woman.

My Kindle for iPhone and the iPhone it rode in on


Cinder is not just another pretty face. He aspires to be his own man, but finds himself longing to belong to another man.

Cinder never thought that he could rise from the ashes of his life, but an unexpected encounter with a woman claiming to be his fairy godmother may be just what he needs. Finding himself flung into his very own fairy tale, she sends him off to meet his Prince Charming. But was the gown really necessary?


7) Congratulations on your recent release of From the Ashes, already garnering fabulous reviews, but can you tell us what your inspiration was for writing Cinder and Henri’s story?

Thank you! I'm very proud of that boy and his prince.

How did I come to meet Cinder? A mutual friend, Linda Reilly, read the Samurai Champloo fanfiction slash I had written and suggested I write an m/m fairy tale for a submission call. I remember thinking at the time "Yeah, right! Who wants to read something I wrote?" But I like puzzles and so I found myself thinking about plausible scenarios for one. I finally settled on a Cinderfella (m/m version of the classic Cinderella story).

Once I came up with the scenario, Cinder wouldn't give me a moment's peace. Remember that fanfic I was writing? I was working on the third chapter and Cinder wouldn't let me finish it until I wrote his story. Insistent little thing! So I set Infinite Infatuation aside and went where Cinder wanted me to go.

That first night, I wrote half the story! I finally tore myself away from his clutches at 4:00 am. I had to get up at 6:00 am for work. That pissed him off and he didn't talk to me again for a couple of days. But in the end, I got his story down.

I wrote the original draft nearly three years ago in about a week's time. Then in May of last year, I worked it over and sent it to my favorite beta readers. I sent it to my editor in June and she picked it up.


The man caught his eye and smiled, somewhat more predatorily than Cinder was entirely comfortable with. What was going through the aristocrat's mind? Cinder began to feel like one of the small cakes the footmen carried on silver trays.

There! I did it, but there is so much more I want to tell you too.

11) Over to you, what can you tell us about From the Ashes, to make us rush out and buy it?

From the Ashes is a sweet m/m take on the classic Cinderella tale, but with some twists that you may not be expecting. Not to mention the hot sex scenes!

I have a short story entitled 496 BC, Alexios' Fate 1.5, due out this year in an anthology.

I'm working on books two and three in the Apollo's Men series. The continuation of Alexios and Galen's story is currently untitled and approximately 2/3 through the rough draft stage. A Spartan Love, book three, is in the initial stages. The intro, also known as Taming Theron in which our young hero discovers that food is the way to a man's heart, is being expanded before the original story line starts. My beta readers love Andreas.

Both, but I can carry a lot more ebooks!

Depends. I'm an extrovert at work and introvert at home.

Primarily save, but if I really want something I will spend. You should see my book/ebook collection!

And that's a wrap!

Thank you so much for taking part, Kayla, and for such great answers!

If you would like to keep in touch with Kayla, you can connect with her here:


And now the important part...